Tensions between Great Britain and the northern European nations were escalating by the turn of the 19th Century.  St. Thomas’s status as a free port had caused Britain great difficulty during the latter half of the 1700s, as both the American and French were able to easily procure munitions for battle.  During the French Revolutionary War which began in 1793, Denmark, Russia, Prussia, and Sweden formed an alliance called the Armed Neutrality Pact with the hopes of protecting their neutral trade in the Baltic from the British, and Britain then declared war on Denmark.  On March 3, 1801, a British warship engaged a Danish warship on the south side of St. Thomas.  Cannon fire from Prince Frederik’s Battery on Hassel Island assisted the Danish warship in driving off the British warship. This skirmish served as the initial warning to the Danish that they were at war with Britain.  Later that month, a fleet of 29 British war ships made their way along the Leeward Islands, capturing Swedish, French and Dutch colonies.  On March 27th, the fleet arrived in St. Thomas, and terms of surrender were agreed upon without a shot being fired.  War among the European nations was in full swing.  The British army defeated a Danish fleet at the Battle of Copenhagen in April of 1801 to prevent its possible seizure by French forces. 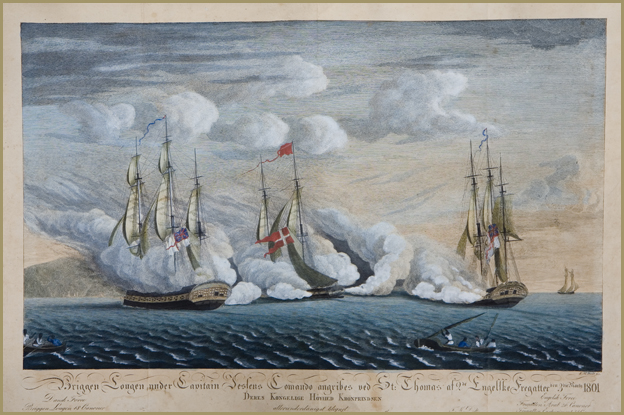 The British military occupied the Danish West Indies from 1801 until April of 1802, when, with the dissolution of the Armed Neutrality Pact at the Treaty of St. Petersburg the islands were returned to Denmark.  During the Napoleonic Wars, 1803-1815 the British occupied the Danish West Indies a second time, in 1807.  During both periods, British troops headquartered themselves on Hassel Island, noting the defensive location of the land (still a peninsula at this time) and desiring the separation from the “unclean” town of Charlotte Amalie.  During the first occupation, at least 2 companies of black slave soldiers, members of British West India Regiments, were stationed on Hassel Island.  Under the command of British Lieutenant General Thomas Trigge and Lieutenant Colonel Charles Shipley, the occupying troops utilized Danish fortifications and further developed the island throughout the years with more than 30 new military structures.

After the Napoleon was defeated, the British returned the islands to Denmark on April 5th, 1815.  The long period of war and occupation negatively affected the once flourishing economy of St. Thomas.  The Danish government now took control of the fortifications on Hassel Island and private land ownership was restored to the Hazzell family.

*Image courtesy Hassel Island Committee Chairman’s print collection.  This is a Danish print, there is no record in the logs of the British Captain of the Privateer Experiment being involved in the conflict.