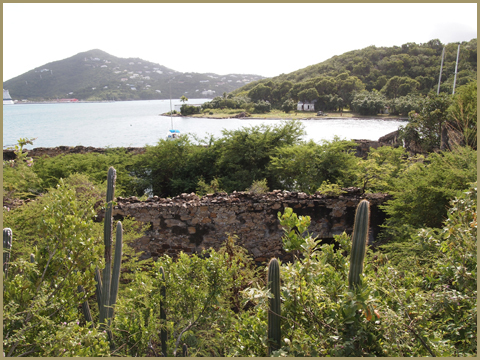 Hassel Island, as a part of the Virgin Islands, exemplifies the typical features and variations of an arid subtropical forest ecosystem, ranging from dry to moist in climate.  The land is characterized by a dense populations of shrub-like tropical vegetation, cacti and various succulent species.  The terrain is rocky.  Geographically, this area of the Caribbean region experiences well-defined rainy and dry seasons.  The wet seasons are often subject to harsh storms, including hurricanes. 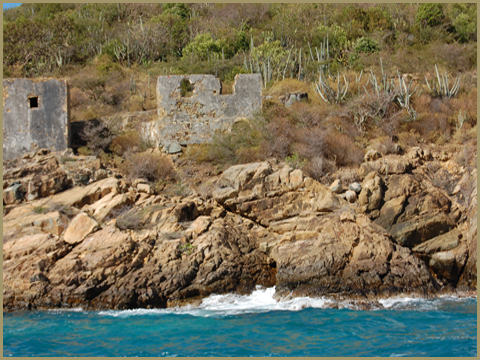 St. Thomas is comprised of volcanic rocks and their sedimentary products that formed over a span of about 80 million years.  The rock layers generally trend east to west and are moderately to steeply inclined towards the north.  As a consequence of this tilt, the oldest rocks are exposed on the southern portions of St. Thomas.  This Cretaceous volcanic rock, uplifted and modified by faults, folds and extensive deformation during tectonic activity has formed the deep natural harbor of St. Thomas.  Hassel Island resembles the description of St. Thomas, with a rocky coastline, steep slopes and a few bays.  The topsoil is very thin in most locations and has not been reported at a depth of more than 75 centimeters.  Except in the area known as Careening Cove, centered on the eastern side of the island, there are few large trees.  Most of the island is covered with a dense growth of thorny scrub brush (with local names such as “catch and keep”).  Despite this seeming uniformity, a total of 299 species of flora has been catalogued, within 66 families.  20 species have been listed as endangered.

Experience the wonders of Caribbean nature as you traverse more than 2 miles of trails, taking in all that this tropical island ecosystem has to offer.

Protected by the National Park Service as a Historic District and Nature Preserve, Hassel Island will be conserved, preserved and documented for the benefit of future generations.  Find out more about the ecosystems and environmental concerns of the Virgin Islands at Virgin Islands National Park.