Assorted artifacts collected from the site

The complex included all of the typical buildings necessary for military housing including a kitchen, and even had separate living quarters for married soldiers and NCOs.  The barracks themselves were designed to house 48 men each, and a total of five were constructed.  According to British documentation, two additional buildings designed to house two Companies were built, but have not yet been identified.

During the French Revolutionary War and Napoleonic Wars, African slaves were enlisted in the British Army in what were know as the British West India Regiments. At least two companies of these soldiers were stationed at Hassel Island in 1802, based on British pay records.  These soldiers had a much lower death rate from the scourges of European soldiers in the West Indies – malaria, yellow fever, and alcoholism.

Additional Reading
The Creation and Utilization of British West India Regiments in the Caribbean during the Revolutionary/Napoleonic Wars (Excerpt from Master’s Thesis) by Charles W. Consolvo 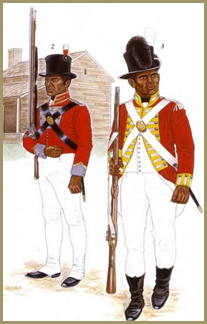